Several years ago I travelled overseas by plane from Australia to Europe for a holiday.

Every now and again I did some Chi Kung exercises in my seat to stretch out, narrowly avoiding the flight attendant running over my toe or knocking my knee with the drinks trolley.

After several hours I needed to do some Tai Chi so I ventured to the back of the plane to practice and get the Chi to flow.

Well, it was an adventure because I had to manoeuvre my way through a fog of smoke that appeared from the back seats, just below the ‘no smoking’ sign.  There was no point in telling the attendants as some of them were smoking as well.

I was probably better off practicing on the wing of the plane but it would have been a bit draughty so I decided to back myself against the wall and adopt a standing posture.

Embrace the tree posture didn’t work as I had passing traffic occassionaly bump into me. I was tempted to do so fajing but that would have been unsociable.

I settled for a standing posture with my arms to the side and visualised the movements from the form. I could feel the Chi flow again and eventually returned to my seat and made sure I tucked my long skinny legs in, to avoid the trolley menace.

I felt energised and was happy I was able to do my ‘really small frame Tai Chi’ in a confined space.

Performing the Tai Chi form is like going on a journey without travelling too far to reach a destination.

Well, the other day I took the wrong journey and still ended up at the right destination.

I was performing my Tai Chi form at the The Convent in Abbotsford,  during a break at the Australian Appreciative Inquiry Forum day.

It was a beautiful sunny day and the grassed courtyard was the perfect environment to practice  my Tai Chi form. I was focused and relaxed and commenced my journey with the opening posture and ventured onwards as I had done thousands of times before.

I lost my way.

During the journey I ended up facing  the wrong way in ‘Wave Hands Like Clouds’, missed the path to ‘Parting The Wild Horse’s Mane’ .

When I had realised what I had done I created a couple of new paths to include the missing postures and continued on until I had reached the end of the journey at ‘Completion’ of the form.

Many years ago I would have been very annoyed with myself for losing my way in the form. But now it doesn’t matter.

If I occasionally go on the wrong journey, it’s okay, as long as I reach the right destination.

I heard him mutter ‘Tai Chi doesn’t work’ but I resisted the temptation to explain and justify why it does work.

He wasn’t disrupting the group and it was probably his first attempt at Tai Chi so I ignored his comment.

My attention was devoted to the room full of people who were actively engaged and enjoying the Tai Chi energizer I used as part of a facilitation day.

Ironically this fellow was right.

Tai Chi does not work.

Especially if you stop after one minute of practice. 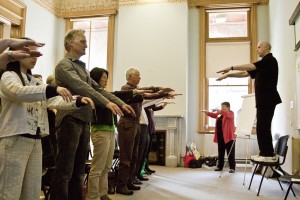 When there is little space one has to improvise.

In this photo I had to jump up on a chair so the back row could see me.

There were 40 people in the room at the Abbotsford Convent here in Melbourne, Australia.

I was one of the organisers of the first Australian Appreciative Inquiry Forum and helped out with Tai Chi energisers throughout the day.

Plus I took photographs and recorded short interviews for a flash slideshow of the event. We hope to have that completed and up on the AI website soon.

I’m glad the chair was stable otherwise I would have been demonstrating Big Goose Falls to The Ground (secret technique).

In the previous post I discussed  my approach to Tai Chi presentations I deliver.

That is – demonstrate a skill, get participants to do it and then ask an open question such as ‘do you feel any sensation in any part of your body’?

Usually I get someone answering the question.

But sometimes no one answers and what follows is silence.

Rather than give in to temptation and make excuses I simple move on and say something like ‘just practice more in your own time and see how you go’.

This is  a practical approach as usually in a speech or presentation I only have a maximum of ten minutes to introduce, demonstrate, get participants involved and ask the open question.

If I was running a workshop I’d have much more time to teach and develop the flow of Chi so most participants can actually feel it.

So even if a participant in a presentation does not feel the Chi at the very least they have been introduced to Tai Chi and challenged to practice and see what happens.

And if they do practice I’m confident that most will feel and believe.