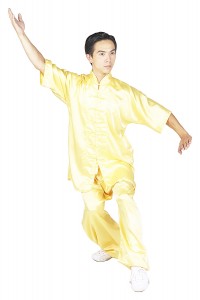 What’s Tai Chi? A question I’m usually asked when Sue and I go out and run our facilitation workshops and ‘Pozitive Kidz are happy kidz’ programs.

Here is a basic explanation of what Tai Chi is.

The five major areas of Tai Chi are;

Tai Chi is based on the 2000-year-old philosophy of Taoism.

The Taoists believed you could achieve a harmonious life by seeking the Tao (natural way).

In practical terms this means you need to harmonize your mind and body with nature before you can find the Tao.

The Yin and Yang are opposite forces or energies, which are in constant motion.

One of the many interpretations of Yin and Yang is in the area of good health.

We achieve good health when our Yin and Yang energies are balanced.

Tai Chi consists of a series of movements and postures that are performed in sequence to create what is called the ‘form’.

I often share the following story with various groups when Sue and I are running our workshops.

Twenty-two years ago a friend of mine, who was a Tai Chi teacher at the time, tried to convince me to do Tai Chi.

At the time I wasn’t interested because I thought Tai Chi was for elderly people and besides who wants to embarrass themselves by prancing around.

Well, he kept at me ‘try Tai Chi, try Tai Chi’, and after two years of being pestered by him I finally gave in and said, ‘look, if I try it will you stop annoying me?’

So I went to my first Tai Chi lesson here in Blackburn, Melbourne, Australia.

It was a church hall and as I entered the hall I noticed 20 other nervous beginners milling about.

My instructor yelled, ‘Big ones at the back and small ones in the front.’

I thought, ‘you beauty, I’m tall. I can hide down the back.’

After that one hour lesson I was hooked for life.

It’s now my passion,  part of our business AQ/KQ and an excellent way of maintaining good health.

I often thought why did it take me so many years to try Tai Chi.

I think the answer lies in what a Tai Chi master once said, ‘you will come to Tai Chi when you are ready.’ 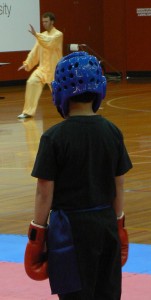 I was at the recent annual Wushu and Tai Chi Festival held here in Melbourne Australia.

I have not been at this event for years and I decided to go along and take a few photographs.

They had three designated areas in a large sports hall. One area had Wushu activities, another Tai Chi and the other Kung Fu sparring.

I was seated on the gym floor near the Kung Fu sparring area watching the juniors competition.

During a break in the fighting I caught this young fellow, about 10 years of age, gazing into the distance watching the person in yellow competing in the Tai Chi forms division.

I like this photo because it represents to me a nice Yin Yang moment.

I wonder what the child was thinking of that man in yellow moving in a strange slow motion way?

He certainly seems captivated by the Tai Chi.

Footnote: I have other photographs of the event and will post them later.

Walk with your legs – avoid swinging your arms unnecessarily

Challenge yourself: Do your form in the opposite direction.